Scroll down to see the report

The Match: Champions For Charity was one of the first live sporting events to return after the COVID-19 pandemic effectively shut down the sports world in mid-March of 2020.

Framed as a re-match of the 2018 head-to-head golf challenge between Tiger Woods and Phil Mickelson, this event paired each golfer with future Hall of Fame Quarterbacks Peyton Manning (Team Tiger) and Tom Brady (Team Phil.)

The event raised $20 Million for Coronavirus relief efforts. MVP analyzed and valued brand exposure across broadcast and social media to determine the value returned to their 11 Official Partners.

A review of the data insights and value generated for brands during the broadcast of The Match.

The Match delivered the third highest rating for the events in the reopening of the sports world after 2+ months of non-activity due to COVID-19.

The Match audience only trailed NASCAR (the first live sports event post-COVID) and the NFL Draft for total viewership.

The Match outshined the previous Match event between Tiger and Phil, which went the Pay-Per-View route with just over 1 Million viewers. It also surpassed the previous reigning highest rated cable golf event, the 2010 Masters, which marked Tiger Woods return to golf post-scandal, as well as the 2019 PGA Championship and Open Championship.

Over the course of the broadcast, MVP detected over 1,600 individual logos for the 11 Official Partners, generating over $32.9 Million in value during the event.

The Top 5 Brands drove 80% of the total value, with Title Sponsor Capital One accounting for 37%.

To better understand how value was generated during the broadcast, MVP analyzed the placement type of the five (5) brands mentioned.

The top placement during the event was the branded backdrops generating nearly half (44%) of the value for the brands listed. Backdrops were seen behind each tee box and the practice putting green during the event.

Branded Backdrops drove over 44% of the brand value for the Top 5 Partners. With visible assets behind every tee box, brand logos accumulated value as all four players took advantage of socializing on the tee box, which delivered longer on camera branded durations.
top 5 brands
remaining brands
aLL THE BRANDS

During The Match, MVP detected 1,232 logos of the Top 5 Brands. Most logo detection had a short duration on screen and therefore generated less value. Overall, The logo detections were evenly distributed over time, with small spike at the beginning of The Match.

The 6 remaining brands were detected 528 times and generated a value of $6.76 Million. Most detections were small and fairly distributed over time. Wheels Up was an outlier in that their logo was detected for a longer period during the start of The Match.

All together there were 1,600 detections generating $32.9 Million. With Capital One, Wheels Up, and DraftKings being detected for the longest total amount of time. Meanwhile, Capital One, Audi, Progressive, DraftKings, and Michelob Ultra were detected the most frequently.

Taking it Brand by Brand

Here we explore how the value of the Top 5 Brands was generated during The Match. Click on the highlighted circles to see the underlying activity that produced valuable branded moments for these partners.

As the Title Sponsor of The Match, Capital One capitalized on their war chest of assets to gain $12 Million worth of brand exposure. With more than twice the airtime than the next closest partner (Progressive), Capital One averaged 7.5 minutes of brand exposure for every hour of the broadcast.
493
Brand Logo
Detections
46.5
Brand Time on
Screen (Minutes)
$12M
Total Brand Value
(Million USD)

Nearly 47 minutes into The Match broadcast the two teams took to Hole #1 to tee up their upcoming round of golf for COVID-19 relief. Capital One’s exclusive exposure on the tee box accumulated a total of 526 branded seconds (or 8.7 minutes). The exposure generated over $2.36M in brand value from the backdrop, match lockup logos, and logos featured in personal messages from Samuel L. Jackson. 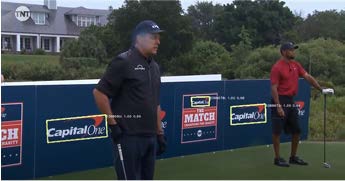 The end of the broadcast also featured Capital One in an exclusive format. The brand was featured on the check being donated to COVID-19 relief funds, and with close-up shots during the end-of-match interview, the exposure rank and the 5th most valuable brand inclusion for Capital One during the broadcast. 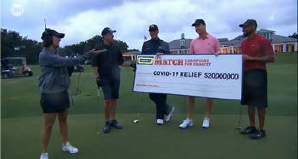 Progressive aired 3x the number of commercials than the next highest brand, Michelob Ultra. With 10 spots throughout the broadcast, Progressive averaged 52 cumulative seconds of branded airtime per commercial due to the high visibility of multiple logos on air at one time. 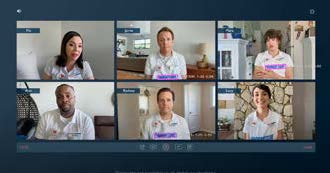 Closest to the Pin Graphics

Progressive saw spikes in value on the holes where Closest to the Pin Challenges were in play. Branded tee box backdrops and logo inclusion within the graphics delivered an average of 17 seconds per exposure and produced an average of $782K in brand value on both Challenge holes. 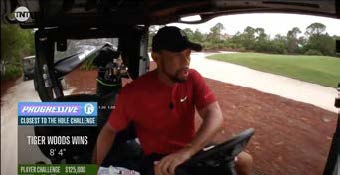 Audi owned assets were heavily featured pre-match and throughout the front 9, resulting in nearly 70% of the brand’s value occurring in the first half of the broadcast. Although the brand had unique activations, duration and value were primarily driven by their inclusion on tee box backdrops.
241
Brand Logo
Detections
16.2
Brand Time on
Screen (Minutes)
$4.20M
Total Brand Value
(Million USD)

From the players arriving in Audi vehicles, to owning the naming rights to the Audi Driving Range, Audi found ways to creatively place itself throughout the first half of the broadcast. 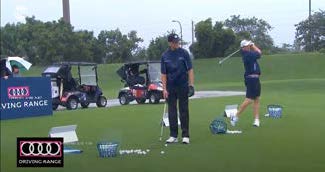 The Audi Long Drive Challenge on Hole 3 helped produce 4.5 minutes of brand exposure, which led to $1.1M in value stemming from branded tee boxes and graphics. 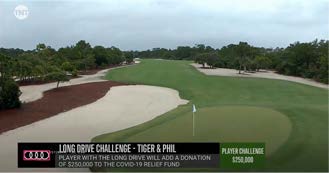 Michelob Ultra’s branding efforts were led by their beer cart placement behind the putting green during pre-match coverage of the broadcast. By utilizing the camera angles of players practicing putts, the cart seemed to always be the centerpiece of the shot and was they highlight of their marketing strategy for the day.
129
Brand Logo
Detections
9.3
Brand Time on
Screen (Minutes)
$2.40M
Total Brand Value
(Million USD)

With unique creativity throughout the entire match, Michelob Ultra’s strategically placed beer cart behind the putting green helped kick off an afternoon of content with consistent references to the golf cart. With features of the cart in commercials, references as part of a giveaway during the match, and more, content related to the cart helped generate half of Michelob’s value during the broadcast. 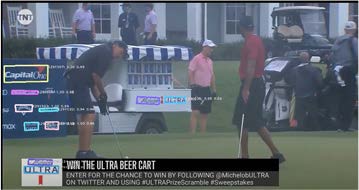 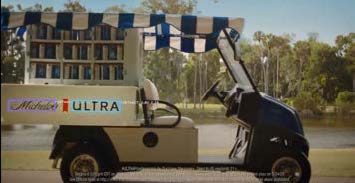 DraftKingsDraftKings brand strategy was seen in a two-fold approach during The Match. With a goal of driving traffic to their platform during pre-match coverage, the brand was seen in two commercials introducing a promo code and references to their website in addition to ‘Play for Free’ graphics. As The Match progressed, branding shifted to live money lines as players teed off and approached greens.
50
Brand Logo
Detections
9.3
Brand Time on
Screen (Minutes)
$2.39M
Total Brand Value
(Million USD)

With attempts to draw traffic to their site, DraftKings commercials at the beginning of the broadcast featured a promo code to enter the $50,000 gambling pool for free. Value accumulated by the transparent logo placement in the bottom right corner of the advertisement. The logo placement was visible throughout the commercial. 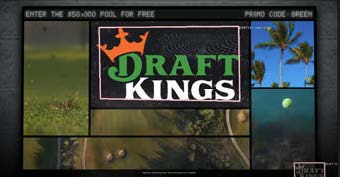 Differing from the other Top 5 Brands represented in this report, DraftKings accumulated most of its value (64%)through logo inclusion on the branded graphics during The Match. With an extended presence on screen, the money line graphics averaged 18 seconds per exposure and was seen across multiple holes. 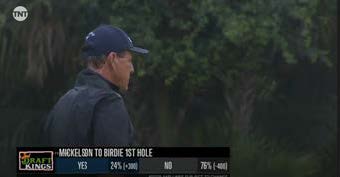 Data insights and value driven for brands through all of the social engagements surrounding The Match.

Throughout the broadcast, social was an effective awareness driver for The Match with extremely high impressions and engagements.

This high level of interactions and activations produced valuable results for all associated brands and slingshot the event into the #1 Trending Topic spot on Twitter.

In total there was $2.93 Million generated through social media posts related to the event. Capital One was the clear winner on social capturing 94% of the brand value from conversations related to The Match.

Capital One By Platform

Capital One received $2.76 Million in value across the 4 social platforms analyzed. Instagram led the way by producing more than 63% of the total value, while YouTube landed on the other end of the spectrum contributing less than 1%.

MVP analyzed content from the top social accounts mentioning The Match between 5/22-5/25, focusing on the use of event hashtags, keywords and mentions of the 4 athletes involved.

Bleacher Report proved to be a good steward for their WarnerMedia broadcast siblings, as their promotion of the event across owned social channels contributed to 96% of the value attributed to media accounts. Bleacher made 106 posts that received more than 2.6M engagements and over 245M impressions, which generated $2.39 Million in brand value for Capital One.

Samuel L. Jackson, one of Capital One’s top brand ambassadors, participated throughout the event from tee box introductions during the broadcast to continued activity on social.

His large audience reach helped Sam earn the top performing celebrity honors, as the branded content he produced delivered $26,238 in brand value for Capital One.

User generated content saw a spike during the 5pm hour when Tom Brady sunk a shot from the fairway to birdie Hole #7. Just before the event defining moment, Brooks Koepka took to Twitter to announce that he’d donate $100K if Brady were to par a hole on the front 9 holes.

Accounts like the NFL, Bleacher Report, and celebrities like Brooks Koepka & J.J. Watt were a few notable accounts contributing to the massive spike in mentions after Brady's shot on Hole #7. These accounts, with large numbers of followers (NFL: 25.5M followers, Bleacher Report: 9.11M, J.J. Watt: 5.57M, Brooks Kopeka: 322K), significantly amplified the reach of the event on social media.

Mentions of Team Tiger and Team Phil peaked at 8PM during the check presentation where it was announced that the event was donating $20M to COVID-19 relief.

Based on average viewership metrics and current CPM rates, the total value accumulated for The Match’s official partners totaled $35.8 Million. This reflects visible logo presence in commercials and in-match coverage.

The Top 5 Brands Who Gained the Most

80% of the total broadcast value was captured by five brands (Capital One, Progressive, Audi, Michelob Ultra, and DraftKings). These five brands saw 80% of their value accumulate from brand positioning on backdrops, logo placement in commercials, and branded graphics throughout The Match.

Capital One Benefited the Most from Official Hashtag

Capital One’s exposure on social media matched their broadcast valuation dominance. In usage of the official hashtag (#CapitalOnesTheMatch) and other event mentions, top accounts in the social landscape drove over $2.7 Million in brand value for Capital One.

Mentions of the event on social totaled over 38,000 mentions from 5/22 - 5/25. Social conversation spiked when Tom Brady birdied Hole #7 from the fairway.

Let's have a call to understand your measurement goals.

Take a look at our product and methodology with a demo.

Align our products and services to your needs in a tailored package.