With The NBA Away, NBA 2K Continued To Play

While esports engagement did not grow as massively as some anticipated during the pandemic so far, the NBA's "fourth league" continued to innovate 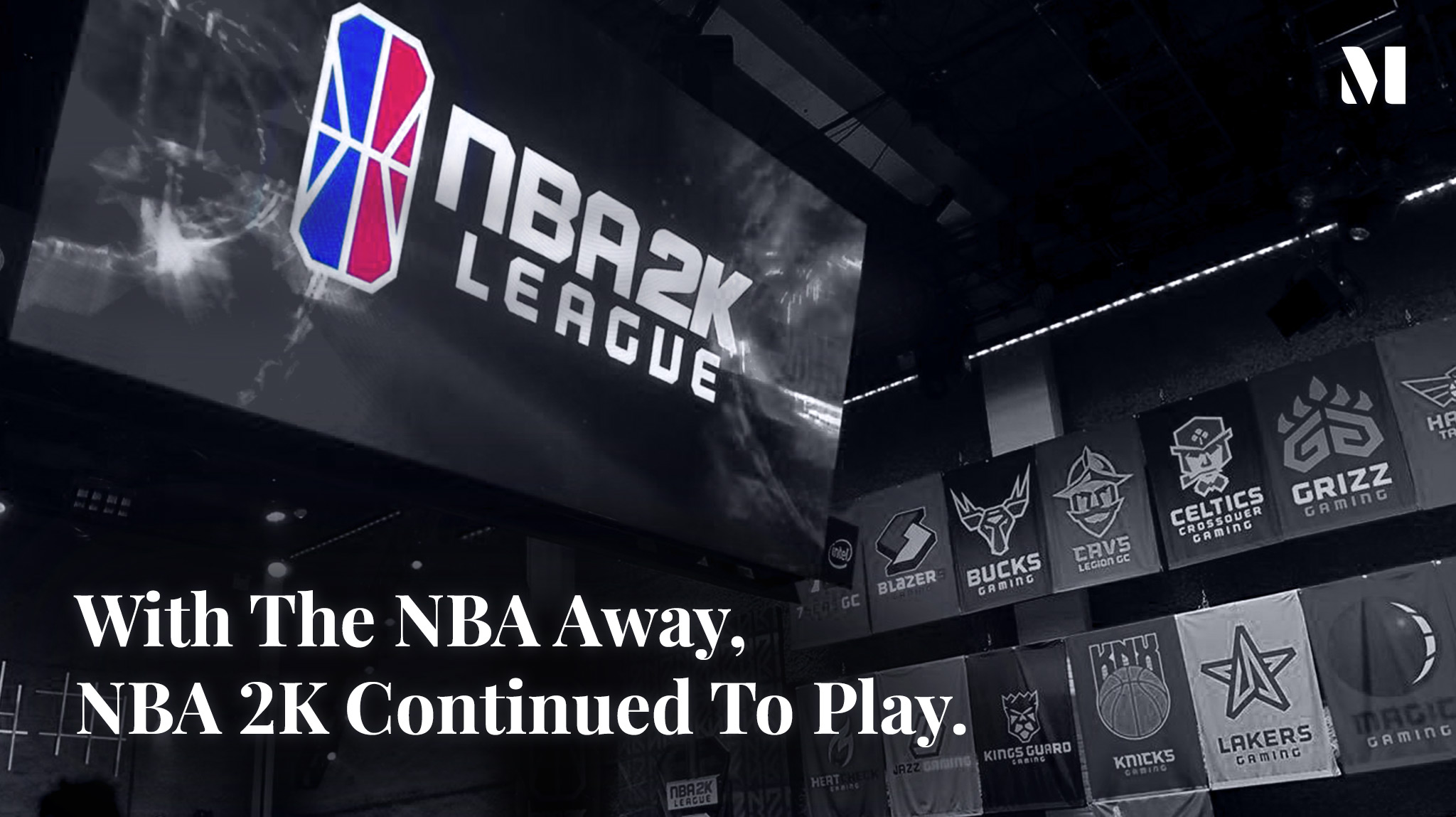 We are close to returning to action in sports across the board in North America, from stadiums and training camps to “bubbles,” and as we close in on watching everything from the NBA and NFL to WNBA to MLS to MLB and the NHL, it is always good to remember some of the thoughts that arose across the sports business world the day Rudy Gobert of the NBA’s Utah Jazz tested positive and the sports world, and most of the world around us essentially stopped.

One of the wonders coming out of March 12th was “Would this pause in traditional play lead to an explosion of interest in the esports and gaming world, both for casual fans and for brands?” While we saw some amazing engagement and innovative crossovers around platforms like the eNASCAR iRacing Invitational Pro Series, which  brought in an average of 903,000 views, 8.53% more than the previous televised esports record holder, the massive migration to gaming by brands really did not happen. There are many reasons for that, one of the biggest is that traditional console is still a business and a property all to itself, with many nuances and markets that speak globally per GAME, not to esports overall. Meanwhile brands scrambled to figure out how to cut losses and maintain a presence during a pandemic, with the social unrest going on, but they could not pivot fast or smart enough to a prosperous but still very fluid offering in and around traditional gaming. Also, games were hit hard in terms of engagement, as many of the biggest onsite tournaments and activations were canceled for the spring and summer, leaving play to the very busy but sometimes hard to measure online space.

However, one area that we continue to monitor in terms of crossover (no pun intended) is NBA 2K. While not always thought about in the traditional vein of esports, like games such as World of Warcraft or DOTA or League of Legends, NBA 2K, under the guidance of the NBA and Take-Two Interactive, has sought in the past three years to be the vehicle which connects the traditional NBA fan to the lucrative and fast-growing world of gaming. It looks and feels like basketball, and has the players on the virtual court casual and diehard fans know and follow, yet it built up its own audience by bringing in professional gamers who live and breathe the game as much as real-life “basketball.” The engagement by fans, and consequently by brands, has grown exponentially since the official league launched as the fourth property under the NBA umbrella (NBA, WNBA, G League, and NBA 2K League) three years ago. Stars have been built, media engaged, streaming services launched, and brands have come on board. The NBA 2K Draft has also become a cause celebre every spring, uniting some of the world’s greatest players and putting a spotlight on them as the league has done for years with its rising NBA and WNBA players. The newest element this season was home play…where teams of NBA 2K players would be competing in home markets…many times with fans in the stands, as well as at a swanky new facility in Manhattan. That element of play would, like in traditional gaming, be another centerpiece of engagement and activation never really seen in sports gaming here in North America, and other sports games, like the ventures MLS and the NFL, were starting to grow, would probably follow if successful.

Again the pandemic took its toll, and the NBA 2020 2K League tipped off and has been played so far this year, without live audiences as had been hoped, but with online innovation and growth, maybe not to the level that had been hoped, but to a level still not seen before with a sports gaming property in North America.

One area of pivoting (again no pun intended) was the move to pull NBA players into the environment and co-mingle and play with the best gamers live on ESPN during the pandemic. It was a value add that also showed the interest and engagement of the actual and the virtual stars fans knew. Each NBA team had a player represent them in the tournament, from Kevin Durant, of the Brooklyn Nets to Donovan Mitchell of the Utah Jazz to Trae Young of the Atlanta Hawks, Devin Booker of the Phoenix Suns, Andre Drummond of the Cleveland Cavaliers and even Rui Hachimura of the Washington Wizards, with the winners receiving $100,000 for their favorite charity (cause marketing again a great crossover move to get engagement from a younger audience that looks to cause as a key decision point in engagement).

In the end, Booker beat Suns teammate Deandre Ayton in a multi day event televised live that brought great discussion from players and fans alike and set a stage for a platform that can continue to grow in future years, with the goal remaining to create and expand a vehicle that will lure new, more socially engaged fans to learn more about the NBA while giving traditional NBA fans who have a passion for gaming another extension of fan loyalty to engage and follow all things basketball year-round.

Back to brands, where were the wins during the pandemic for NBA 2K? There were several.

One that was a new player in a new category, POINT 3 Basketball. A disruptive apparel company, POINT 3 found a niche that spoke to the professional gamers…shorts to wear during competition that were made of self-drying material, that became the rage as “gamer shorts” during this current season. That category, like the gamer chair category or headphones that are key parts of pro gaming, is one that frankly did not exist in traditional sports but fit well with 2K and will continue to expand.

Then you had all the activation that Bud Light has put into NBA 2K. In addition to commercial spots and product placement, Bud Light took the step to create their own gaming channel on Twitch, focusing on personalities tied to 2K and expanding the storytelling around all forms of gaming. Their Late Night Gaming show became must-see shoulder programming for fans of the game and has become an essential activation tool that showed great ROI for Bud Light as they grew their engagement with NBA 2K.

From the non-traditional side, in terms of gaming, Panera Bread, who, other than getting product into the hands (literally of gamers) and doing some great interaction on Twitch, worked in a category, “The Rookie Who Delivers,” to reinforce the notion to a young audience that Panera isn’t just some folks in an older demo sitting around a store location...their quality and custom made sandwiches are available to go in markets big and small, and can fit the tastebuds of the youngest fan as well as his or her parents or older siblings. Another traditional integration that has garnered great buzz in, shall we say it, tasteful, manner.

Other key and innovative engagements with brands during the 2K season have been the Brooklyn Nets partnering with Zenni Optical for both sunglasses and versions of gaming glasses that their players have worn during and around gameplay, and the Raptors Uprising 2K team living and playing in a fully tricked out house during the pandemic all sponsored by Bell Canada (having an undefeated team in Toronto to complement the success that the defending champions had on the court hasn’t hurt for engagement either). Zenni’s 26 posts, 1,330 engagements, 109,000 impressions were tied a great deal to the gameday activation content with players using the glasses during play, while Bell Canada’s 26 posts tied to their highly successful team yielded over 105,000 impressions.

We also have the multifaceted and creative brand opportunities that Monumental Sports and Entertainment have built around Wizards District Gaming, pulling in brands like Leidos, the Marines, and even more uniquely, the UAE (to showcase gaming to a very expansive audience in the Middle East) as ways to find homes for companies doing a toe dip into the gaming world under the auspices of traditional sport. They love the demo, are intrigued by the engagement opportunity and are now finding cost-effective ways to grow brand space without the high cost associated perhaps with NBA or even WNBA. Taking these brands, as well as other traditional gaming partners like SAP and AT&T, and tying them to a developing demo both in-game and in shoulder programs that still matured during the pandemic (ZOOM chats between players and gaming fans, even school programs tied to STEM with young people in markets where the teams were being represented) prolonged and even built, new shelf life for companies that may have just been sitting on the sidelines while traditional sports play returned.

NBA 2K became a smart, cost-effective alternative that found a growing life in the cloud-based world of gaming and kept companies involved in the business of basketball while all worked to figure out what came next.

So did the bubble burst, per se, on engagement around the NBA during the pandemic? Not really. While we don’t know the extent of make goods and adjustments and write offs that may come from traditional sport, NBA 2K shouldered on and grew and continues to provide a return for visibility and engagement for some traditional companies looking to increase scope as well as new ones getting a step into the sporting door, during a challenging time. It might not be the traditional way in for brand sponsor growth, but then again in the world we are in today, who needs traditional as much as innovative, and the innovative side of hoops rests with NBA 2K.