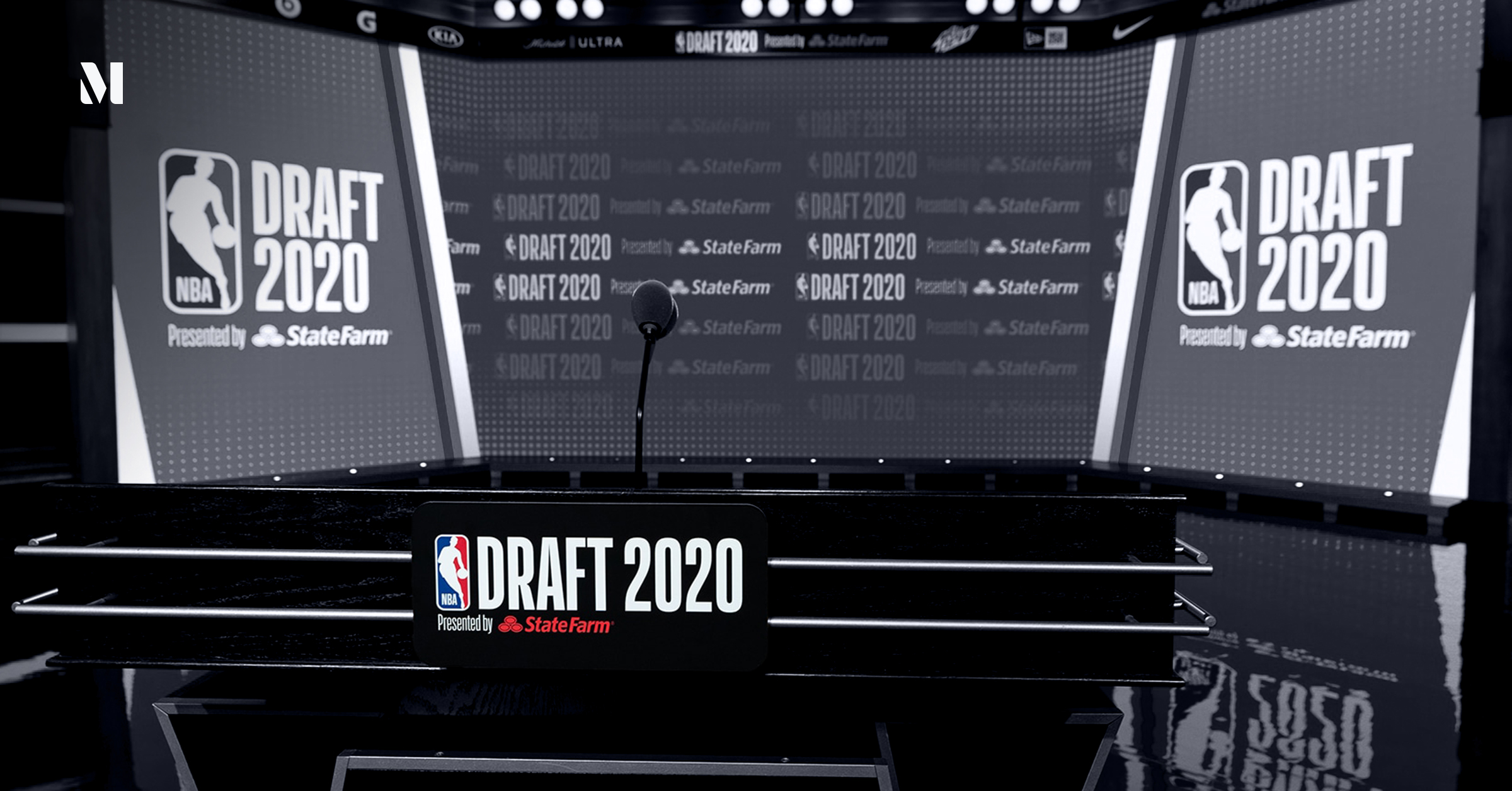 It certainly wasn’t the easiest or smoothest or most conventional of NBA Drafts, but it’s 2020, so what is?

Still even with all its challenges, as the Draft again served as a door opener, literally and figuratively, for engagement as the NBA goes past The Bubble and moves ahead for what will be a fluid and certainly different 2020-21 season that will begin on December 22.

The differences in the Draft presentation this year were pretty broad: gone was the walk to the podium, the screaming crowds, the week-long preparation and presentation by draftees to the world in whatever the host city would be. There was none of the physical interaction where players could share emotion and stories with others, not in their immediate group. The “hat handoff” and jersey presentation from commissioner Adam Silver to those who went in the first round, a shining moment in the career of all of these players, was missing.

What we did have was more creativity, a look into the homes, and in some cases, local clubs or restaurants, of the next set of NBA players, using all the technology and best practices learned from leagues that had gone the virtual route before…the NFL, the WNBA, MLB, and the NLL…all with Silver and others gathered, and socially distanced at ESPN headquarters in Bristol. How did it go, and who was able to find their share of voice from a partner standpoint, let’s take a look.

First, there was the swag box that the NBA used to set the stage and make sure that their brand partners found their way into the homes of the potential draftees. The “NBA Draft Gifting Locker” replaced the Gifting suite that the league would normally have had in the host city, and may have worked out even better as an engagement point on social for the players as Draft night approached. The posts from league, team, and media accounts drove $826,487 in post value.

The league sent 30 of the custom lockers to players. Each locker had internal drawers containing a New Era X NBA 2020 Draft 9Fifty snapback hat for each NBA team, with the idea that each player would don the ball cap when NBA Commissioner Adam Silver announces his name and team. Sometimes it worked flawlessly, sometimes as trades went through, it created some uncomfortable moments (and one time as prospect RJ Hampton was traded TWICE, his original hat, the Milwaukee Bucks, was thrown to the side on live TV by a family member, making for its own unique moment, driving $38,006 in post value from media mentions).

The lockers also had other gifts including a personalized official Spalding basketball, an Oculus 2 virtual reality headset, and a suite of Beats products including the Pill+ portable speaker, Studio3 wireless over-ear headphones, and Flex wireless earphones. Players also received detailed instructions on how to use the equipment for remote media interviews and for the virtual draft. In exchange for the box, the players had to take a photo of themselves that the NBA will use to stitch together a composite group photo with Commissioner Adam Silver. The player’s name is on the box along with the NBA logo and the marks of the league’s major corporate partners and draft sponsor State Farm. The lockers themselves even made it into the live show, again showing the value of effective, and pretty generic, placement. If you look at the numbers,  State Farm: ($8,368,123), New Era: ($287,319) and Spalding: ($89,370) all scored through the program and their overall inclusion in the draft.

Some of the key ways brands also found a way to take their creative best and engage with the next bright lights of the NBA, coming to a screen near you in just over six weeks, included:

Michelob Ultra taking a traditional stance after a summer of innovative “Bubble” activation and served as presenting sponsor of a Draft prediction contest on NBA.com, and drew $500,346 in brand value across Facebook, Twitter, and Instagram.

2K Sports, the NBA’s videogame rightsholder, issued a code during the ESPN broadcast that allowed play with newly drafted players in NBA 2K21 for the first time.

AT&T had WNBA all-time leading scorer Diana Taurasi appearing in various content via a 5G hologram with prospect Patrick Williams. The follow up questions during the ESPN broadcast to Williams after he was taken by the Chicago Bulls also led to even more value add for the stunt.  AT&T also staging a draft-themed scratch-and-win sweepstakes to win DoorDash gift cards, combining with another recent NBA partner. An estimated $114,479 in social media brand value came through this activation.

Pepsi’s Mountain Dew brand signed prospects Hampton, Killian Hayes, Onyeka Okongwu, and James Wiseman, who will participate in a “Green Carpet” content series dubbed “Get to Know the Rookies,’’ and some even found a way to bring a case or two of Mountain Dew into their living rooms for when their names were called.

NBA trading card rights holder Panini went straight to the production space, issuing digital cards of the draftees and pulled in 12 prospects for digital and social content plays. Post-draft, Panini is starting to film a “Road to Rated Rookie” content series with three rookies, which will debut in December.

Tissot, the NBA official timer, went more the traditional route with branding on the draft board visible throughout the event and also outfitted draftees Anthony Edwards, Cole Anthony and Tyrese Maxey with its watches. However some of the best brand value came from another highly engaged star, through the #thisisyourtime campaign. Over $83,089 in social media brand value, with Atlanta Hawks star Trae Young driving engagement as he looked back on his own Draft moment.

Then you had the apparel companies and other miscellaneous brands outside the NBA circle that found their way into Draft night. Beats competitor Bose, which does not have league rights, had signed expected prospects Obi Toppin and Tyrese Haliburton for product exposure, via social digital and post-draft media interviews (this post and this post drove a collective 84,668 engagements and $15,794 in brand value for Bose, with extremely high engagement rates of 51.9% and 48.7%).

Meanwhile LaMelo Ball and his family used the night to expand their new partnership with Puma, making sure the brand was well represented when Ball’s name was called by the Charlotte Hornets. Just one post from LaMelo Ball drove $327,104 in brand value for Puma.

Haliburton, who was selected by the Sacramento Kings, also found a way to work social messaging into his Draft night wardrobe, a Blue Floral Suit. His outfitter worked both “Black Lives Matter” and “920 to the League” into the inside of his jacket, one of the most unique action calls that found its way to broadcast.

Then let’s not forget the brand value that the team storytelling can bring to their new stars. Case in point, in the first seven post draft days, social posts mentioning Obi Toppin or his social handles had nearly 3 million engagements, and 293 million impressions. The top performing post mentioning Obi Toppin posted on IG by House of Highlights had over 536,000 engagements, with an engagement rate of 2.65%, and generated 37.5 million total impressions.

Overall, the night delivered for fans what was expected…it created a sense of normalcy and the passing of the torch to new faces now heading to new places in a year that has been anything but normal. The NBA made sure its partners had the best placements possible by finding insertion points that worked for them, all full realizing that the usual large scale exposure that comes with a big event was going to be sent to the social side of activation. Were there some best practices for the future gleaned, like the use of Holograms and virtual gifting? Sure. Were there some glitches with audio and video and always chaotic draft night trades? Sure. But that was all part of the narrative, and the activation of a June mega event now moved to November for a year.

If you were an NBA partner on Draft night, you made it through and found a way to engage, no harm to the brand, no foul, and this fall that is really a good thing, as the league again showed they can find a way with activation, even in the most challenging of times.