How Tarps Have Helped Find New Wins For NFL Brands 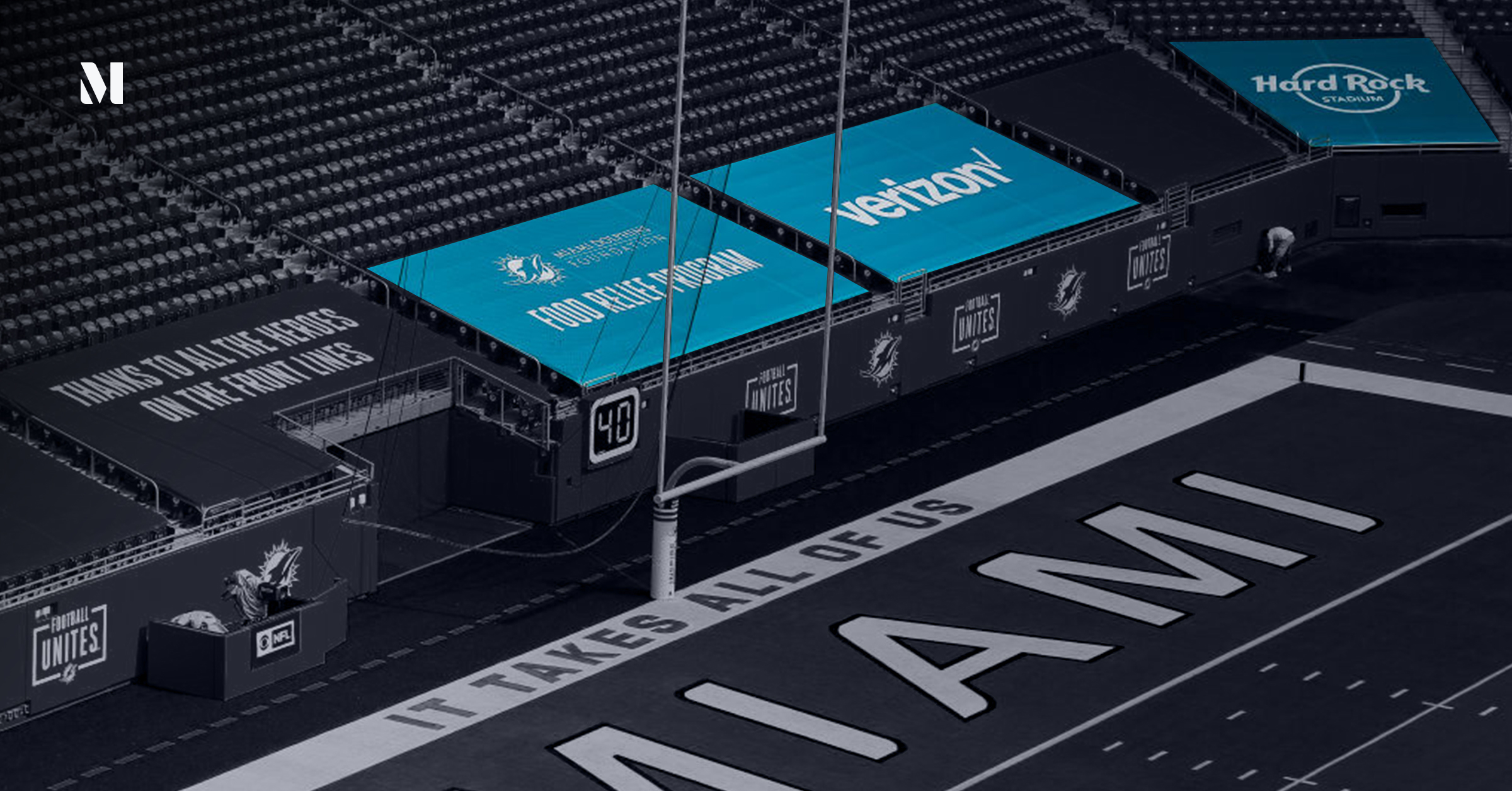 No matter how creative, covering seats with tarps in a professional sports venue has never really been a positive thing. While in some cases, like the Oakland Coliseum or the LA Coliseum, the tarps covered sections that either obstructed because they were meant for other events with different sightlines and value, or they were meant to scale down a venue size for an event that needed intimacy vs. expansion. But in general, cover-ups were usually not a time for popping champagne and celebrating success. The converse of that, the pulling back of tarps, or event curtains, as demand rose for games or events at venues, was really the only time where you probably would see a team point to a tarp as a vehicle for success.

That is until we get to the pandemic of 2020, and the concept of games with no or limited fans in the stands. Tarps, suddenly became an asset, a marketing tool for everything from charity and causes to brand valuation, as the captive broadcast audience, and the broadcasters focused on the action and not those filling the venue and running the court, the ice, or the field. It was a different look for a different time, and the need to assist in bringing brands added exposure that they were not getting from game activation was very important in keeping professional sports viable this summer and fall.

Now while the idea of covered sections was at first thought to have great appeal to brands, the challenges broadcasts had in capturing the value of tarp activations were very unique to each sport. Soccer for example always used a much wider view of the pitch, so tarps wringing the field were in prominent display as play moved up and down during 45-minute halves. No or few commercials during play meant that tarp display was a bigger value add than when the stands were full. The NBA and WNBA, while shot at much tighter angles than soccer, also had their challenges with brand visibility, but the always present tight courtside signage, along with jersey patches worn by teams and some brand advertising on the courts themselves, helped make tarp signage (especially in venues like IMG Academy for the WNBA and Disney’s Wide World of Sports for the NBA which were much less expansive in seating) less of a factor as compensation and valuation were determined differently. The NHL took a good amount of the middle approach, with a camera shot not as wide as soccer and not as tight as the NBA, when combined with dasherboard and in-ice signage, gave tarp presence a bit more of an add-on for the Canadian NHL bubbles.

Then there was the NFL, which presented and continues to present as we head down the final stretch of the season, both challenges and continued adjustment and opportunity for tarp value.  Like soccer, the NFL camera angles are much wider than those presented for indoor arenas, and the field structure offered up more airtime for low field level tarps than what could have been offered for MLB games this past summer. However, for anyone watching an NFL game in recent years, the focus is tight and, on the field, so as the season started, tarp viewing was hard to find and hard to track value.

We are in a season of adjustment, however, and the NFL, as they have with player health, safety and availability, rolled with the hits that were brought along. How has tarp exposure held up? We took a look at who has scored as we head toward the playoffs.

Scoring Up, Value Up

During the first eight weeks of the season, 54% of games scored a total of 50 points or more by both teams combined. What did that mean, the more the scoring, the more the visibility. Games that had at least 50 points or more had 39% more tarp detections than games where the total score was held under 50 points, as end zone shots, or deep field shots where player reactions came into view, as well as replays, came up higher on the broadcast.

Compared to their primetime counterpart in NBC’s Sunday Night Football, tarps on ESPN averaged 1.5 more minutes of exposure per broadcast. While ESPN’s coverage averaged more detections and duration, NBC generated more overall value for the tarp asset by attracting an average of 52% more viewers for SNF than ESPN’s coverage.

MVP ranked the top 16 brands appearing in home broadcasts during the first half of the season. In the report for download, you’ll see that if you are Ford, you are having a great run.

A total of $145 million in value was generated for NFL tarp partners, which includes both broadcast and social channels during the first eight weeks of the season. Broadcasts generated an average brand value of $1.37 million per home game with the valuation taking into account duration, viewership, size, and clarity of partner visibility on screen.

During the first half of the season, viewership of NFL games averaged 10.1 million per broadcast, and branded tarp exposure accumulated over 3.5 minutes (216 seconds) worth of exposure per game. Based on viewership, duration, and additional factors, $1.38 million in brand value was generated for tarp partners on average.

Was the system perfect? No. Did the in-season adjustments made to create more visibility help rachet up awareness? For sure. Now tarps over stands is an anomaly that all leagues hope are a one-time deal as the pandemic hopefully slides back as we cross deeper into 2021. What will remain will not be empty seats, but a lesson learned in camera angles, new use of field signage, and a way to use grit and practicality to help find ROI for your brand partners when the traditional has gone awry. It has not been a perfect solution, but the NFL, like its great players, found ways to improvise during a season, and the result was value generation in a tough financial time for all.

Here's hoping future tarps stay on a roll where we are used to seeing them, while the business rolls along on the rebound.

Download our report on the NFL tarp sponsorship activation

Twitching For Expanded Brand Engagement?
The Streaming Numbers Don’t Lie
COVID-19 Impact Analysis
In order to assess the impact that COVID-19 has had on the U.S. sports industry, MVP valuated social performance by league.
NBA Draft Night: Partners Score In Creative Ways
A Look At How Brands Found Their Narrative On An Unusual Night