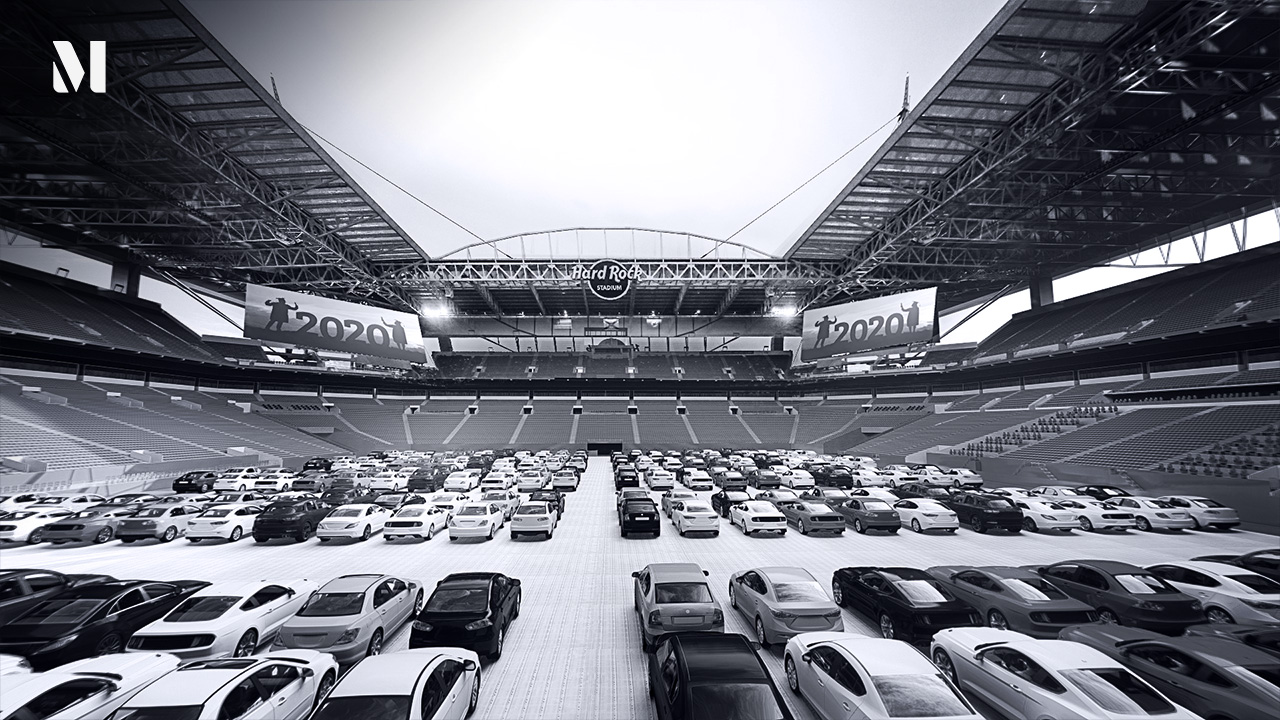 While the return to play has brought us a Sports equinox times six in September, with something for any fan from cornhole to NASCAR, the WNBA to the PBR, the NFL to the NBA Finals to college football, the sad reality is that the Pandemic continues to keep arenas, and stadiums of all sizes largely devoid of their reasons for existence…a dynamic fan experience.

We have seen some limited return of fans on the NFL’s opening weekend in Kansas City (where the Chiefs had almost 20,000 people but the MLB Royals across the street still cannot have fans while Sporting KC can, go figure that out) and Jacksonville and college welcomed some exclusive socially distanced crowds in places like Notre Dame, Oklahoma, and Tallahassee (where Florida State’s socially distancing rules seemed to have gone awry), the palaces built for enjoyment and electricity of the live event, sit idly by, especially those with roofs and contained spaces. While a recent survey by Riptide Partners concluded that avid fans will return to live indoor events within three to four months after getting an all-clear from officials, the clock on such widespread adoption still has not started, and for the live event business and the brands associated with experiential business, that ticking clock remains more of a time bomb than a wakeup call.

What Do We Do With The Venues?

So, while these stadia sit idle of fans but in view of millions, what is an event producer to do? Like everyone in business scrambling for answers, we have seen various forms of high tech (fan walls in the NBA bubble powered by Microsoft) and low tech (well-positioned tarps that get ample exposure during MLS broadcasts) to the unique (cardboard cutouts on display for MLB games) to the brands leaning forward into bringing the engagement home (Bud Light and Pepsi rewarding fans with prizes designed to increase the experience of watching one’s favorite teams), with leagues pumping in customized crowd noise, sharing virtual shots of fans, and keeping announcers enthused with all sorts of visual interplay to make it seem like what is truly abnormal in the fan experience is at least a bit normal for those playing all those games today.

It is hard to see if it’s working, or if the lack of fans has any effect on the games. Several reports have talked about the high level of play during the Stanley Cup and NBA Playoffs being a result of a lack of travel and distractions for those teams in their respective bubbles, which has been a boon for fans watching the excitement at home. Then the NFL opening weekend brought its share of uneasy comments from coaches and players, which included Baltimore  Ravens coach John Harbaugh having T-shirts made that read BYOE: Bring Your Own Energy, to LA Rams coach Sean McVay calling the debut of SoFi Stadium “Eerie” for his teams Sunday Night Football win over the Dallas Cowboys.

For the entrepreneurial in the venue business, there has been any number of activations designed to get fans engaged away from play, and give fans what could be a unique new way to use stadiums, venues and yes even parking lots…a long lost wholly American experience reborn this summer in the form, at least for outdoor venues, as the drive-in.

We have seen the Dolphins’ Hard Rock Stadium and Gillette Stadium in Foxboro become the centerpiece for games on big screens, with socially distanced cars blanketing a covered turf. The Irish band the Dropkick Murphy's streamed a special show from Fenway Park. Meanwhile, Live Nation has used high-tech cloud-based sound technology to bring streaming audio into parking lots for midsized bands at places like Citizen’s Bank Park in Philadelphia but trying to counter with drive-in concerts, all with the idea of creating a safe communal experience for fans around a venue they know and with a commonality of interests, in this case, music outdoors in the summer or fall and at a socially distanced and contained (in cars or lawn chairs) environment. Did it work? In the case of one of the shows, Brad Paisley, as well as social posts from Live Nation, the buzz seemed to be there. There were in total 25 posts mentioning #LIvefromtheDrivein from both accounts, generating 178,000 engagements, and 12 million impressions with a total post value of $214,000.

Some examples of the nontraditional on the music side even went way beyond the venue. One of the breakthrough events of the summer was with Fortnite, which has become a platform for more than just gaming, with their Travis Scott concert showing how to find an audience that many thought would be all about game engagement on their stream channels. When over 12 million people “attend” a streaming concert, one takes a longer look at success and tries to imagine, and then replicate, what similar events can be going forward, Pandemic or not.

Then you had Outside Lands, another key staple of the summer event tour, rebranding to Inside Lands and recreating what the interactive music and pop culture event space could be. Over the course of the weekend, 8/28-8/30, Inside Lands generated 105 social posts across Twitter, Facebook and Instagram, resulting in 38,2000 engagements, 2.2 million impressions, and $37,900 in total post value.

Bridging The Gap To Returning To The Venue

Now, none of this will replace the large-scale mega-events, concerts, or sporting events, that the industry thrives on and fans have loved for over a century. Furthermore, the financial logistics of being able to have elite music events, or massive sporting spectacles, with very limited consumers in attendance have proved to be very daunting.

The result as a bridge, or a stopgap, is innovation in the event business with incremental, where allowed, fans coming back to a venue where they feel safe and secure. From the consumer side, we are an adaptable lot, at least for the short term, and enjoying the quality of play, or music, in our own self-created and safe world has become acceptable, as we have seen in largely rising viewership numbers for winter championships moved to summer and for fan engagement overall on social channels and beyond. Those venues that have welcomed fans back have also seen an uptick in spending and overall awareness, with the hope that as we progress into the fall, a combination of graduated safe openings and high quality of play helps to bring these silent venues back to life.

It's not the answer we or anyone in the industry is looking for for the long term, but we will take the innovation, the support, and the virtual camaraderie until we can get back to being in seats and bleachers somewhere down the line on a regular basis. The silence in a venue is painful to hear… the loud voice of disruptive innovation and engagement is welcomed.